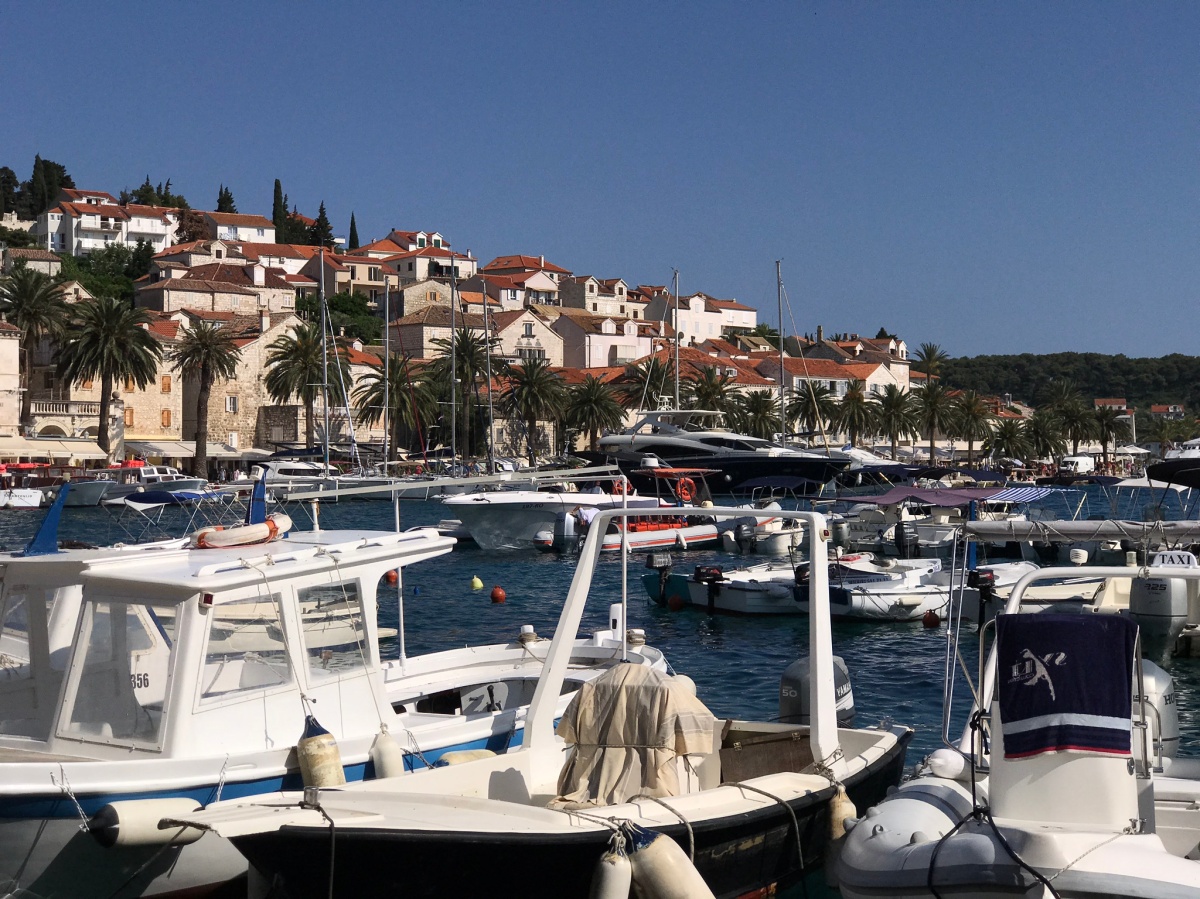 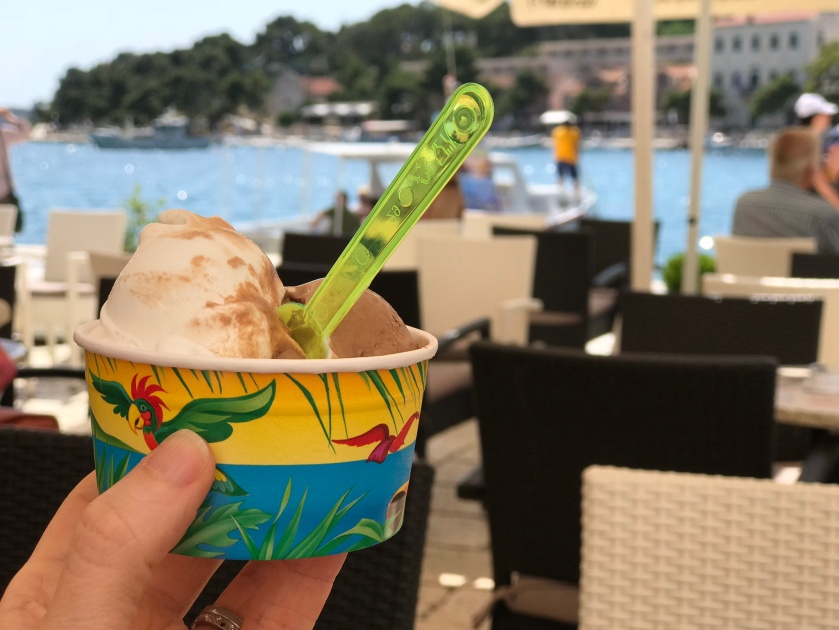 Not much beats a lunch of espresso and gelato on vacation (the caffeine/sugar combination is the perfect afternoon pick-me-up and tide-me-over until a dinner location is decided).  And no destination fulfills the gelato-espresso gorging bill better than sunny Hvar, a long, narrow island off the coast of southern Croatia. 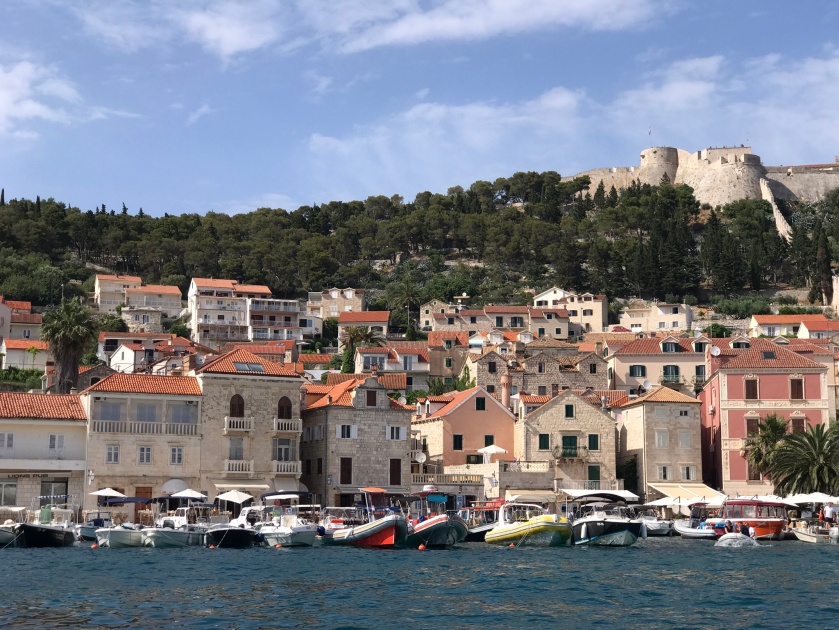 There are two main ways to reach Hvar City.  The first begins with two hours via ferry from Split into Stari Grad (at the northern tip of the island), then a 30 minute drive to Hvar City, where we were staying.  The second is a 30 minute ferry ride from Drvenik, south of Split, into Sućuraj at the southern tip of the island, followed by a 90 minute drive the length of the island to Hvar City.  We opted for the latter, keen to explore (and spend as little time as possible on a rocking ferry).

From the moment we docked in Sućuraj the water swirled with varying shades of aquamarine, cerulean, azure, turquoise, lapis, and teal.  And we actually needed every one of those “blue” variations for our brains to mentally process what we were seeing. 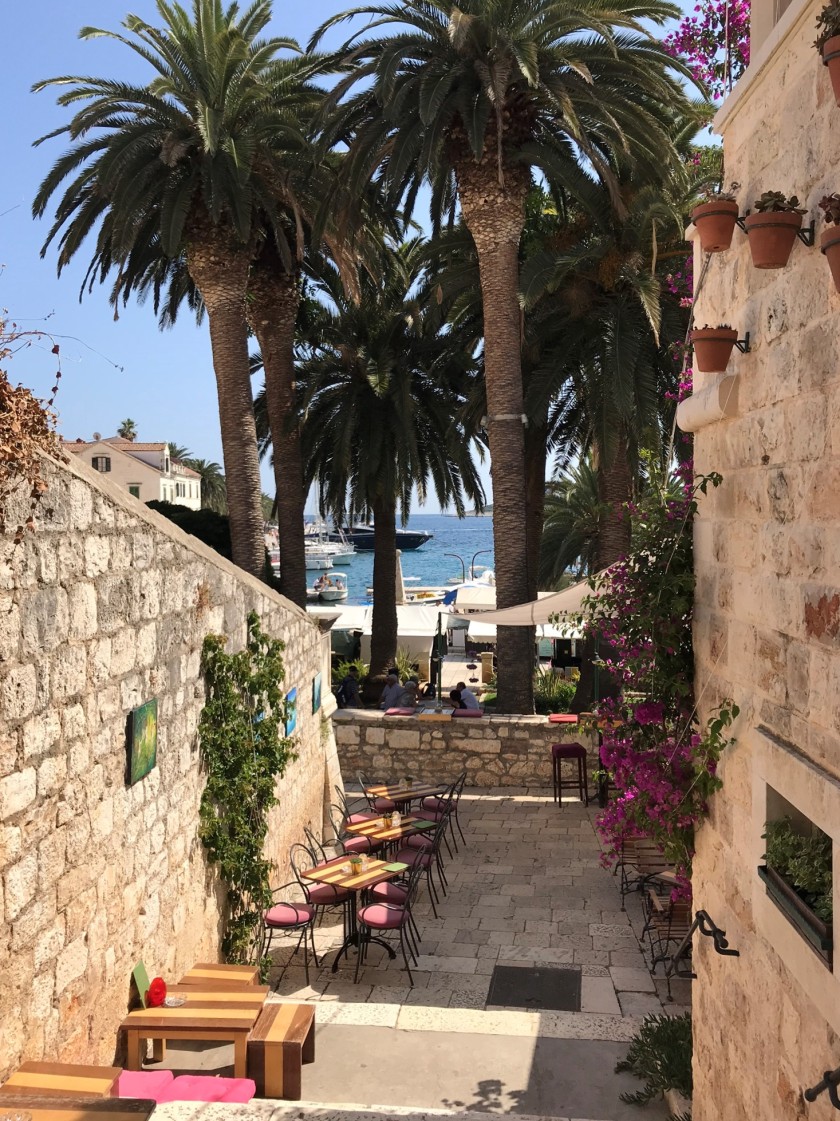 The air was hot and crisp with a tinge of salt on the wind – our Mediterranean vacation had officially begun.  Hvar Island is covered in forests, vineyards, olive groves, orchards and lavender fields, and benefits from fresh water springs.  And its one of the sunniest locations in Croatia.  There doesn’t seem to be much of a downside.  Two hours after docking in Sućuraj, we were checked into our airbnb and wandering the streets of Hvar.

Hvar has been inhabited since the ancient Greeks settled the area, at least as far back as 384 BC.  Its been a major player in Adriatic trading for most of its history, and its tourism industry has been actively cultivated since the mid-1800s. 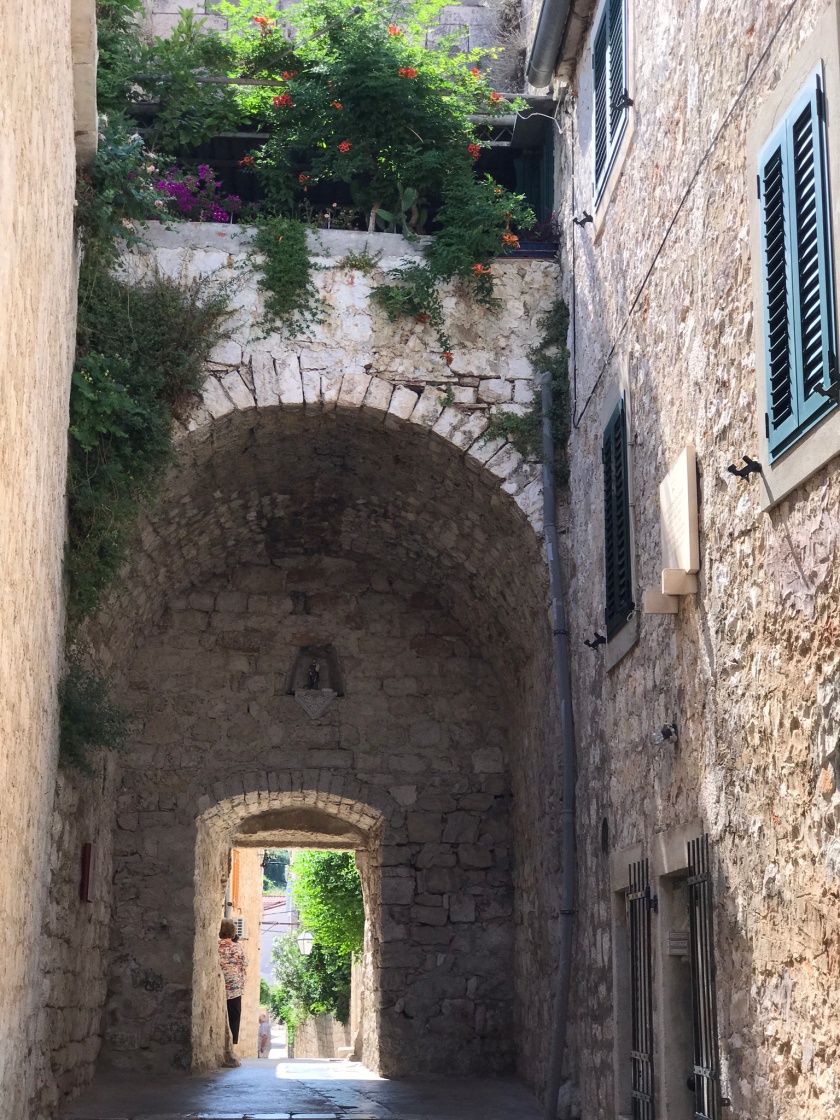 It’s no surprise Hvar City has become one of Croatia’s premier good-time destinations.  Here the ultra-affluent dock their yachts and party with shoe-string backpackers until the wee hours of the morning. 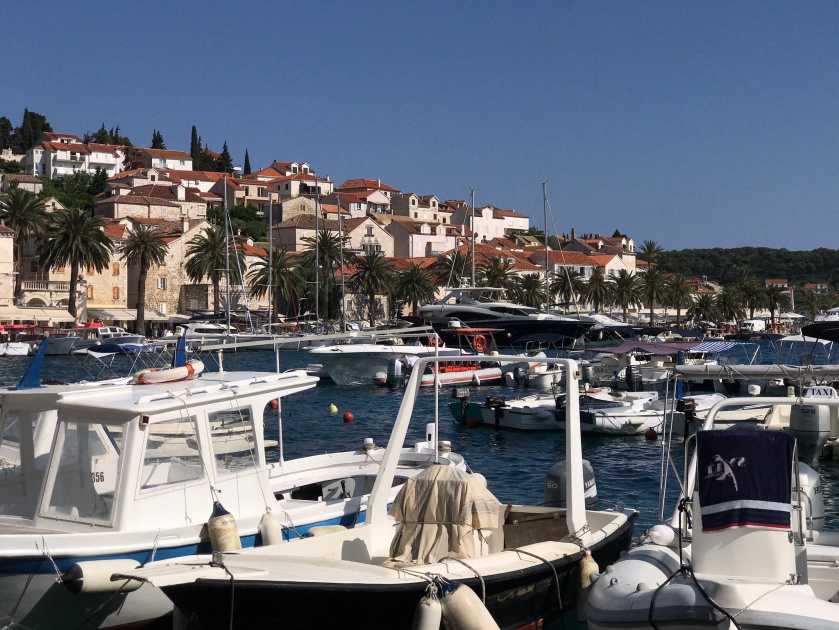 But in early June we had just beat the crowds, and had no problems spreading out on our chosen beaches or getting tables in fancy restaurants.

Our first excursion from Hvar City was just a few kilometers east to Milna Beach, a tiny bay with three beaches, each just a few minutes walk from each other, of smooth, white pebbles descending into crystal clear blue water. 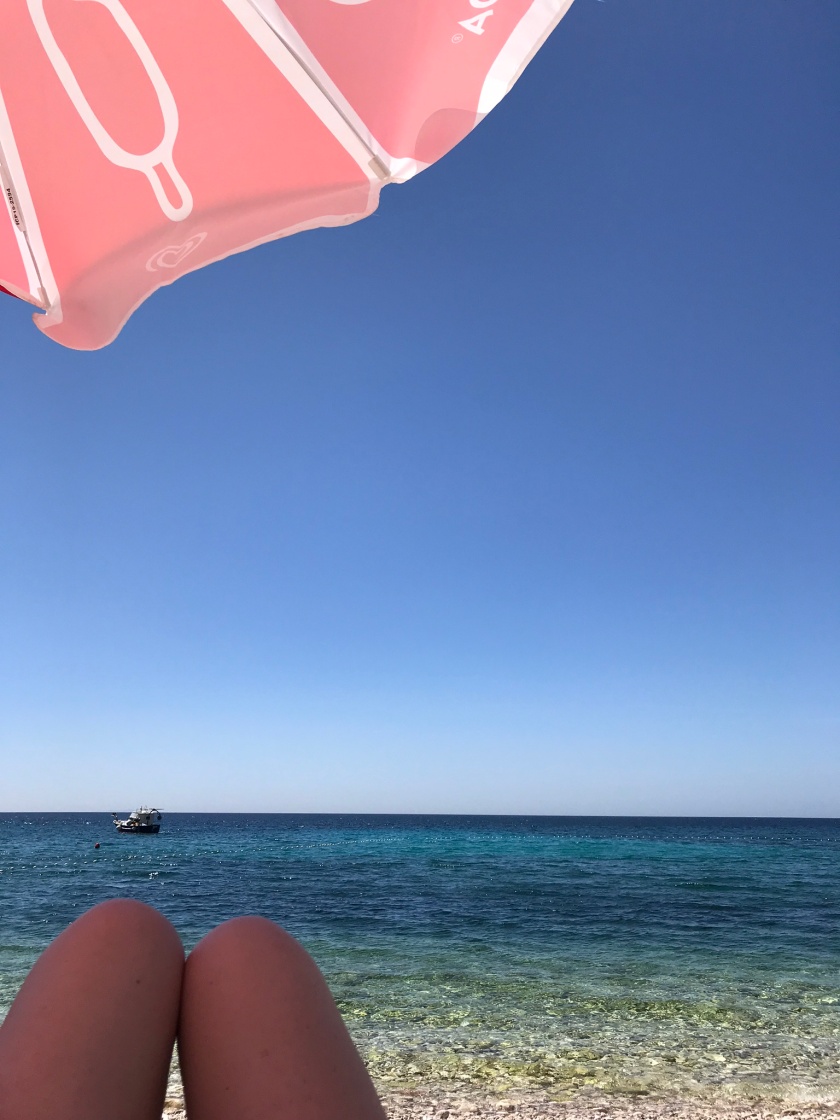 Eleven o’clock in the morning was considered an incredibly early time to start the day, making us the first ones on the beach with our choice of lounge chairs. 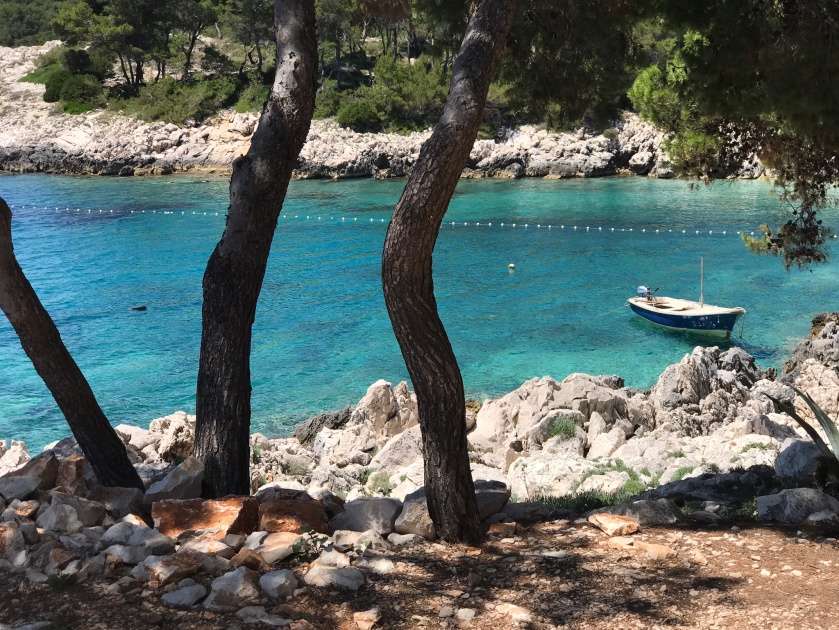 We also spent the afternoon driving around the western side of the island, from the north shore to the south, cutting through mountain villages and making our way around dirt roads clinging to ocean-side cliffs.

While days were spent exploring and lounging on beaches, evenings were spent in Old Town Hvar, window shopping and partaking in the excellent, local cuisine (seafood for me, everything else for Brendan).  We ate at Macondo Restaurant and Black Pepper, both excellent. 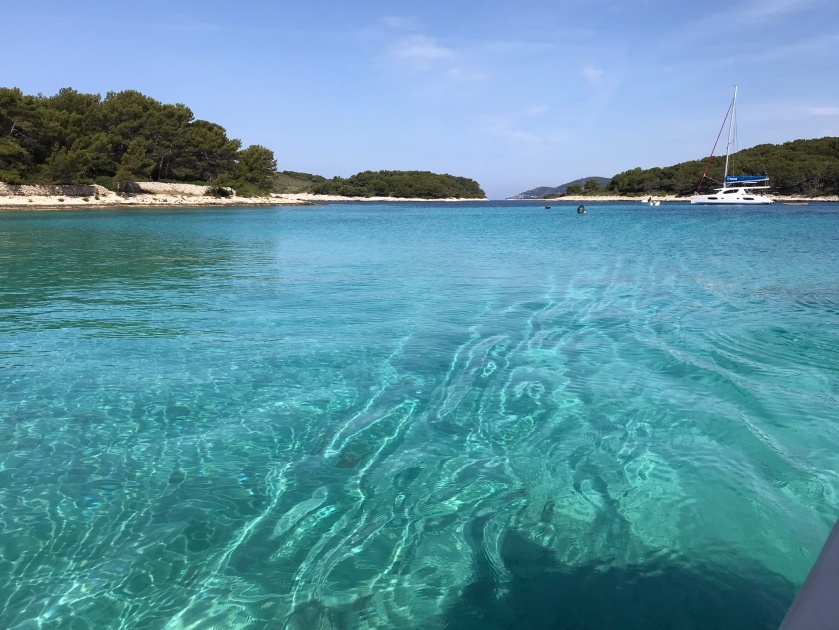 Our second excursion involved a water taxi to one of the many tiny islands off the Hvar harbor, then a five minute hike to “secret” bay, Mlini Beach. 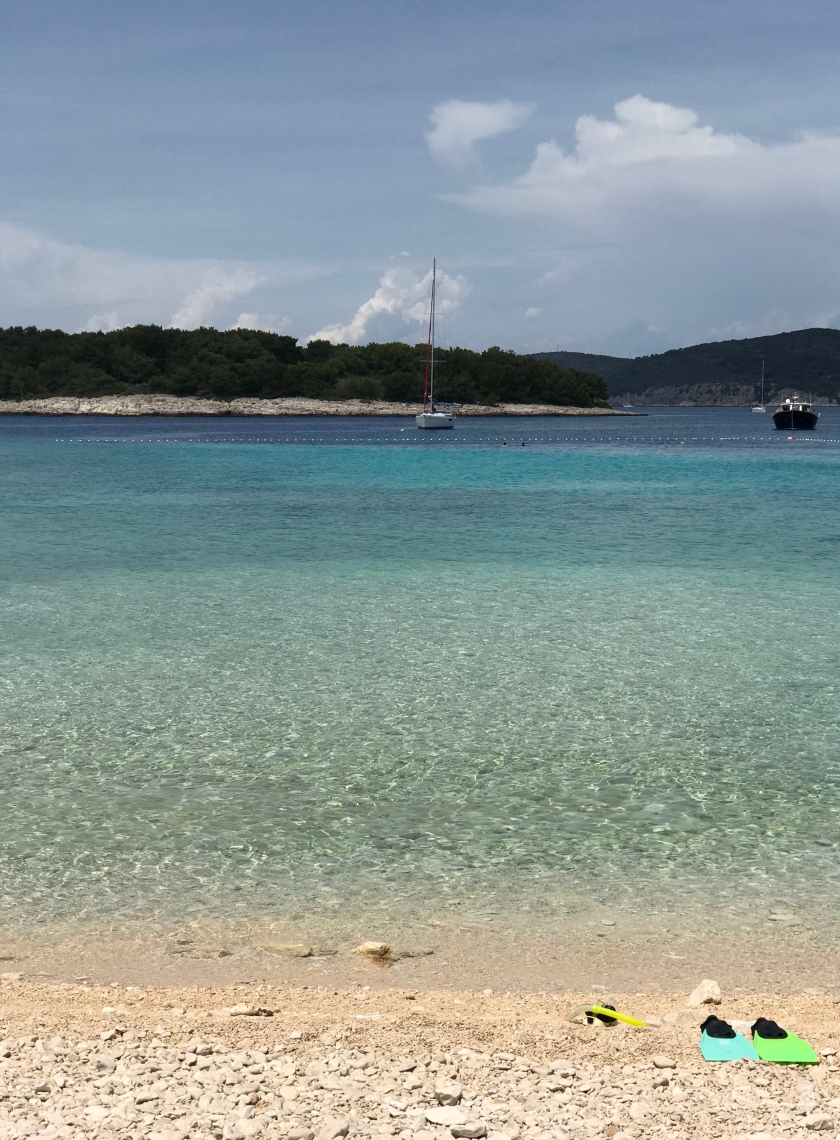 I couldn’t get over the water clarity!  No matter how far out we swam, we could easily see the sea floor. 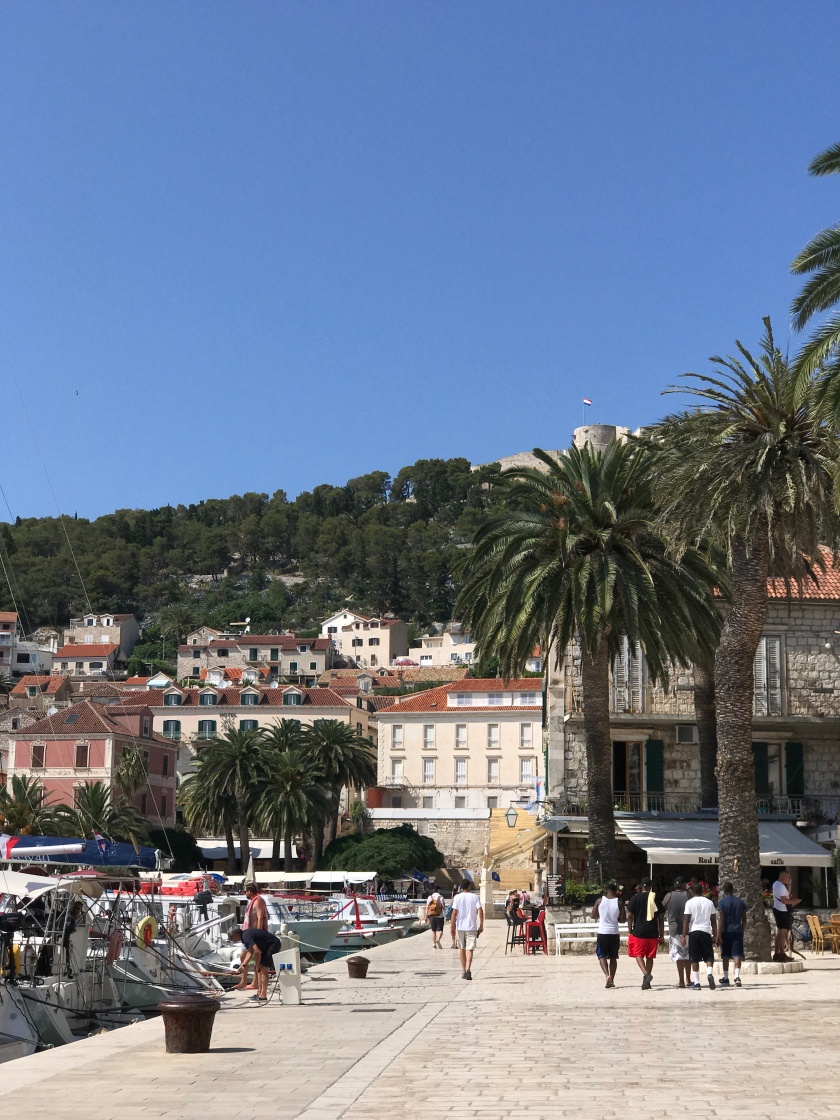 Tall, short, long, round, old, young (too young, it seemed, to be running around party town Hvar without chaperones – gah, I’m old), punk rockers, amazon queens, and biker dudes – Hvar City draws people of all sorts.  The only thing everyone had in common was a complete lack of concern for, well, much of anything (grown men strut around in pink seahorse print swim trunks – love it!).  Give these people hot sand, blue waters, and a cold drink and a casual, swaggering confidence emerged.  It was infectious.

I usually fill up vacations with activities, making sure not one minute is wasted.  But this one was all about down time.  Books, books and a few more books.  And spritzers. 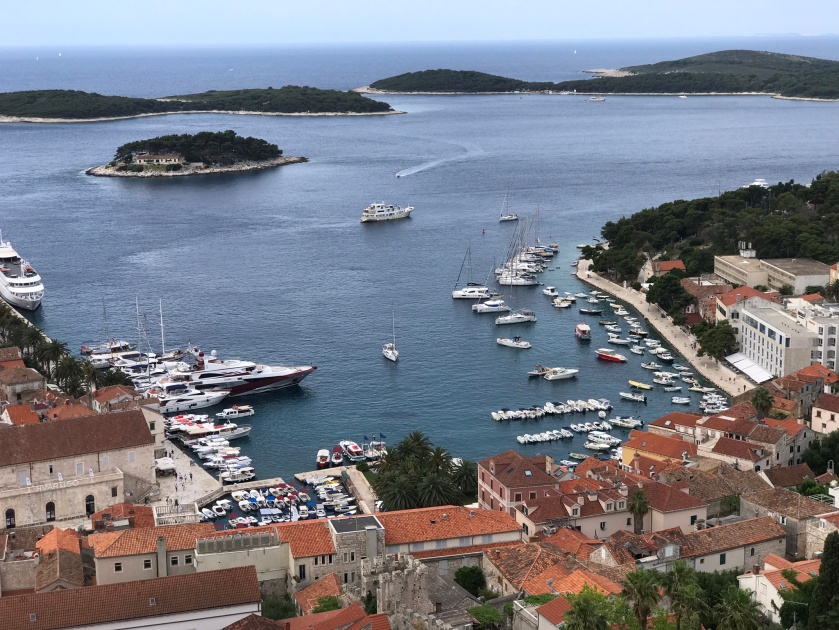 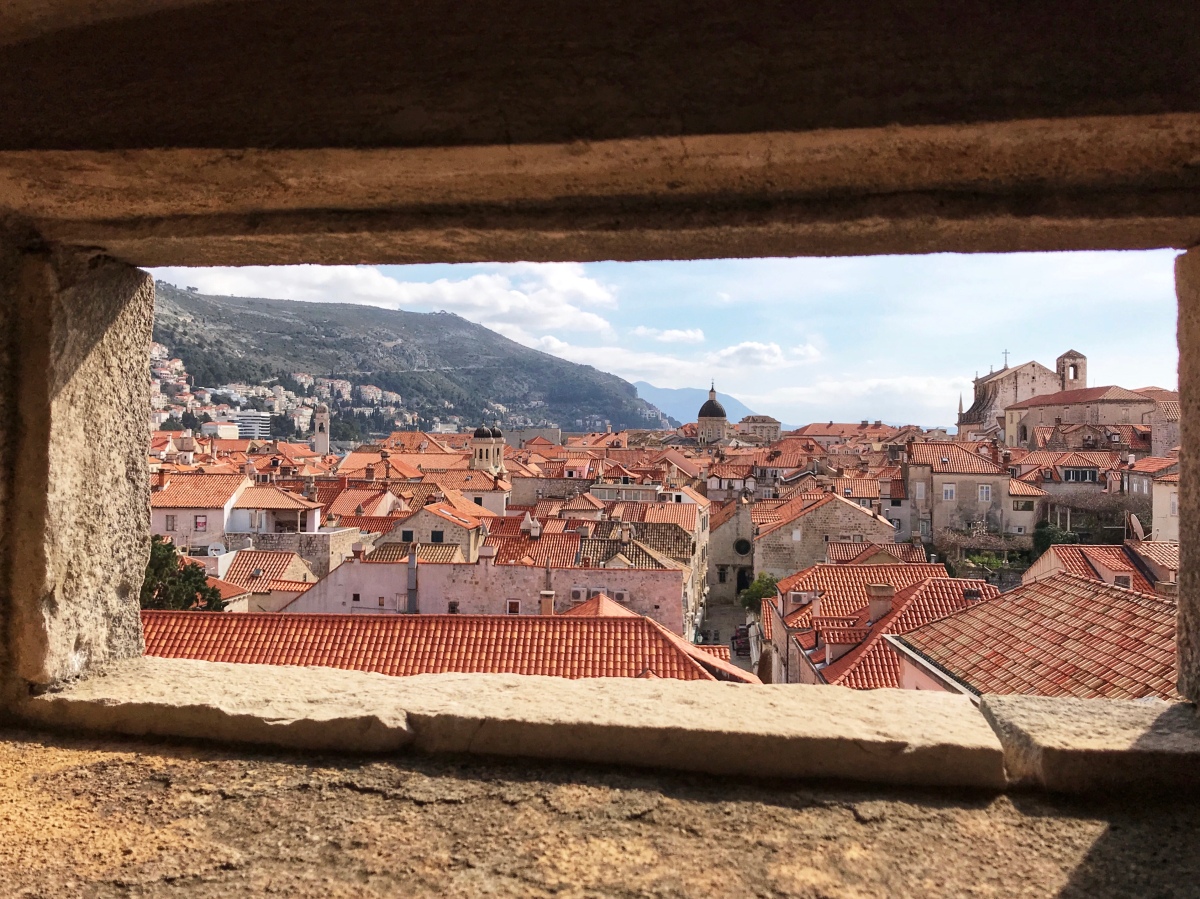 I always have a plan.  And I used to almost always have a color-coded travel spreadsheet – a beautiful, multi-tabbed document detailing business hours and transportation routes and hotel check-out times.  For years I wouldn’t approach a vacation without either; even downtime was scheduled.  When trips involved multiple destinations and I’d end up with only one or two days to explore a particular city, my research would turn to those limited-day itineraries, detailing how to pack in everything of importance, often at breakneck speed.  I thoroughly believed in maximizing my time in a new place, for who knew when I’d return?  It was best to visit the most important attractions the first time around, or so my mantra went. 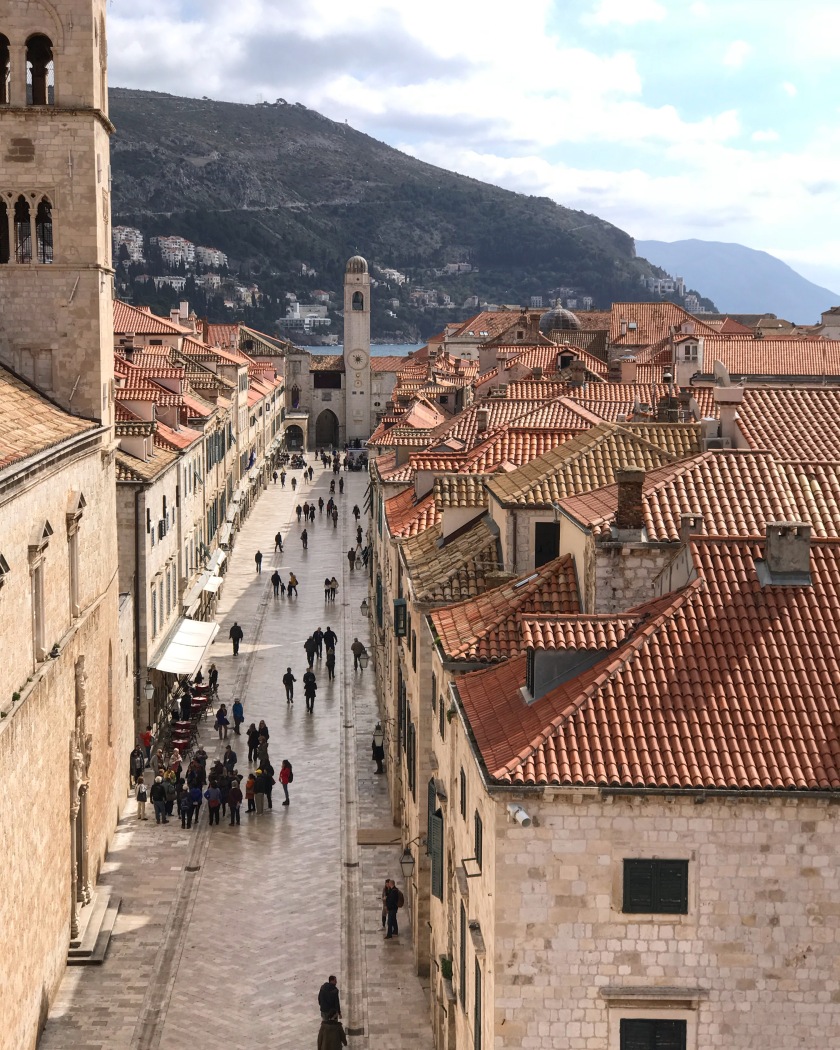 I’m not nearly as neurotic these days, but maximizing my time in Dubrovnik, the tantalizing walled city resting at the southern tip Croatia’s coastline, was exactly my intent.  Lord Byron’s “Pearl of the Adriatic.”  A city with roots so deep, there is debate whether it was founded in Roman times, or earlier, by the Greeks.  It controlled trade and commerce into the Balkans for almost a century.  Built on so many layers, both physically and historically, it would easily take three-plus days to explore everything, and I wanted the trip to be perfect.

But the circumstances of my Dubrovnik visit were unexpected.  It turned out to be one stop of many during a weekend excursion, and one that lasted only a day.  And I was with two dudes who had no intention of running around to take in this or that museum, cathedral or a walking tour.  Which, I came to realize, was just as well – the moment I set foot inside the massive walls the city itself seemed to demand we do anything other than race against a self-imposed clock.  Here, it whispered, on a sunny day with practically no crowds and a lovely light breeze blowing through the streets, life is fjaka: blissful and unhurried. 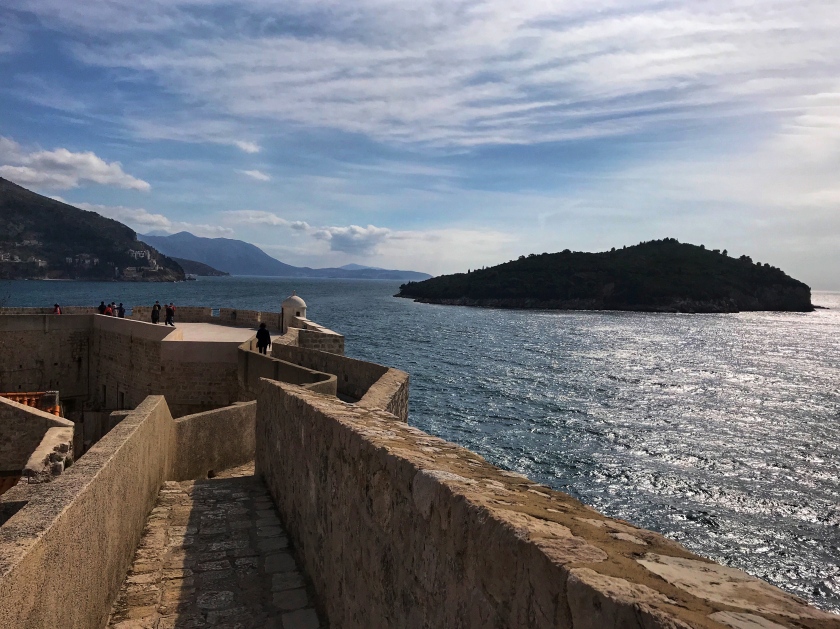 So, we wandered.  We didn’t visit a museum, but we did walk the city’s almost thousand-year-old walls.  Reaching up to 80 feet high, they provide a spectacular vantage point for forest-covered islands dotting the Mediterranean, adjoining fortresses, and the city they define. 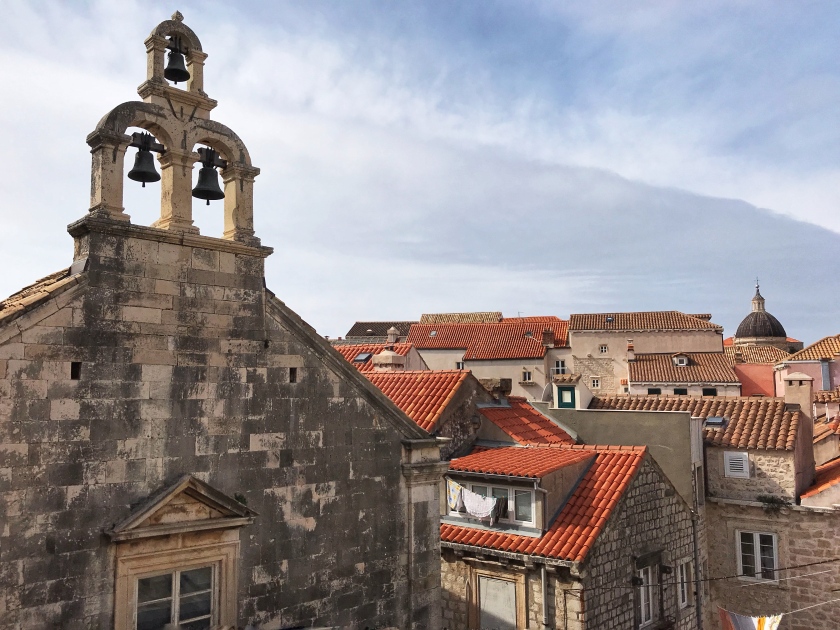 Below us, laughing and shouting children chased soccer balls and each other through the streets, deftly avoiding shoppers and diners and photographers and lollygaggers, all of which appeared visibly taken aback to find themselves in such a beautiful setting. 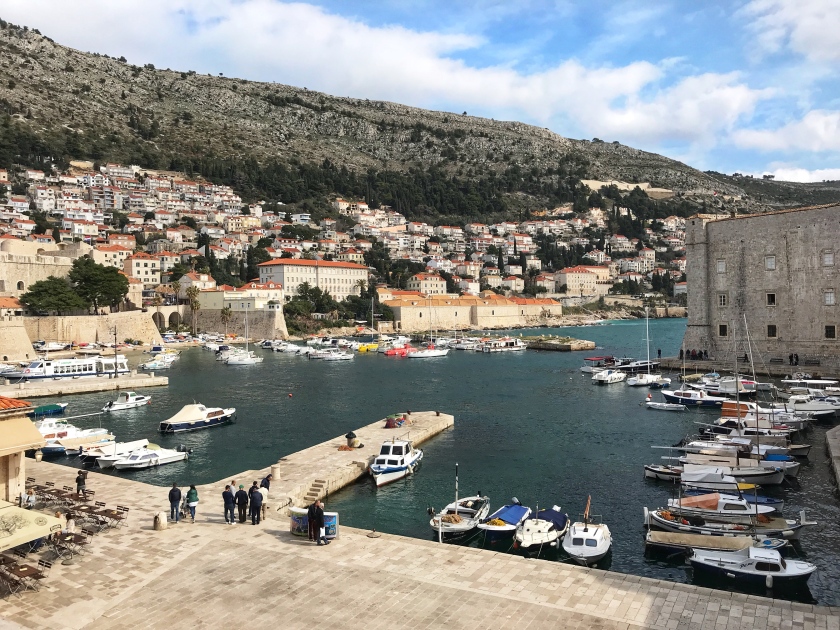 Orderly, stone buildings rested on gently rising slopes towards the east and west walls and were divided by the main promenade running north-south through the city’s valley. 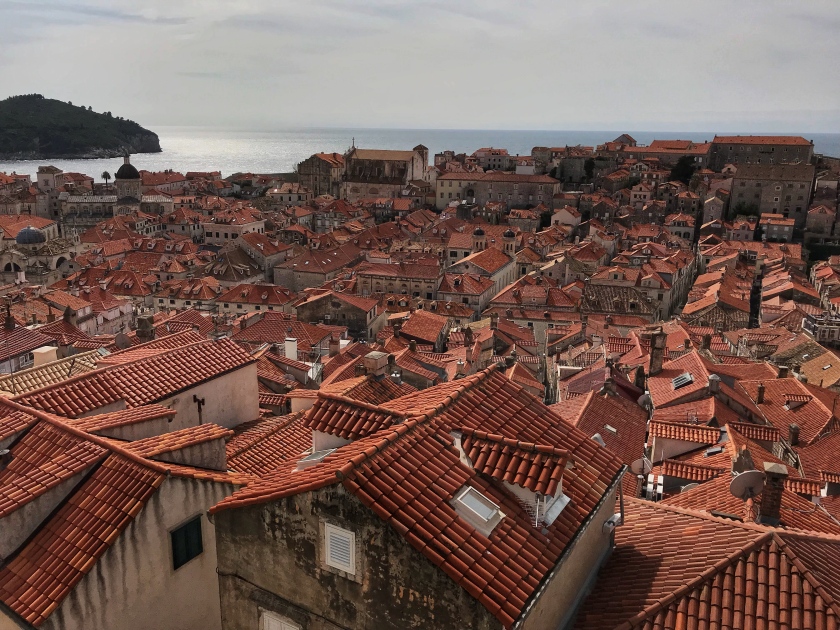 Bright, orange tiled roofs dominated Dubrovnik’s aerial view, a reminder of the recent renovations done to repair damage inflicted two and a half decades prior by Serbian forces’ unsuccessful – though destructive – shelling attempt to take the city during the breakup of Yugoslavia. 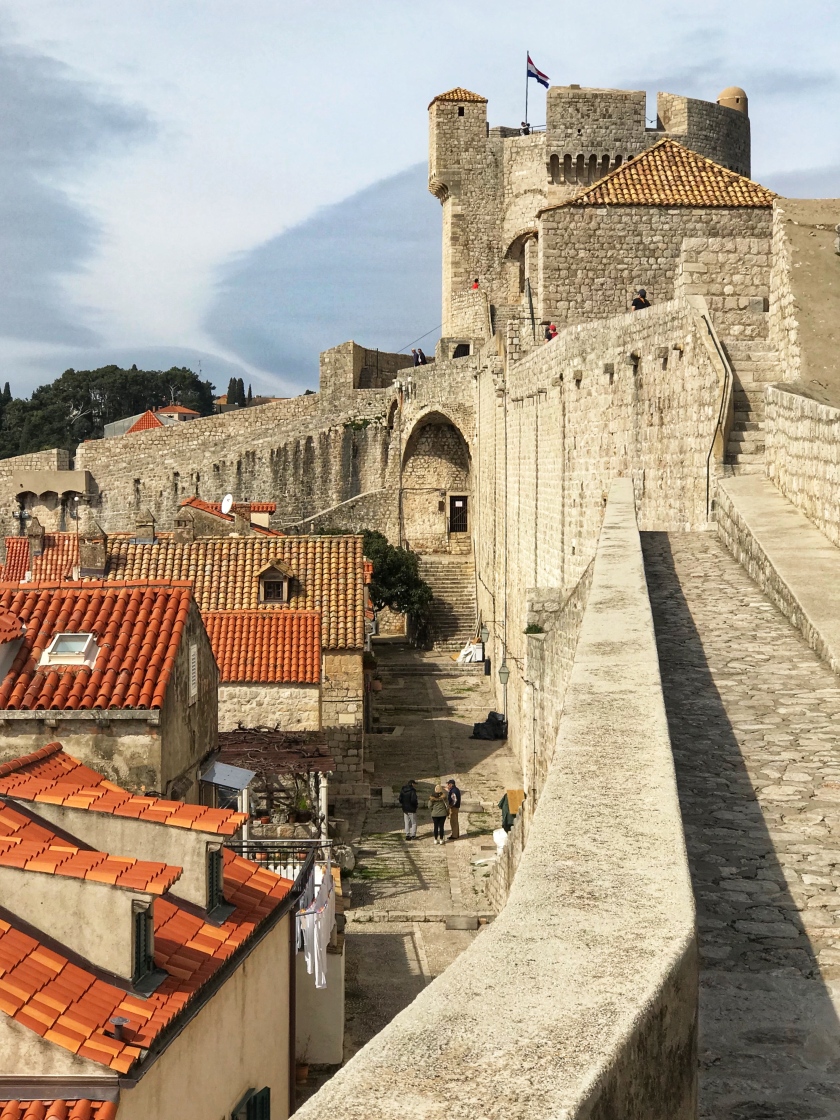 The city has been so wholly repaired, it’s easy to forget the war ever reached this part of the region. 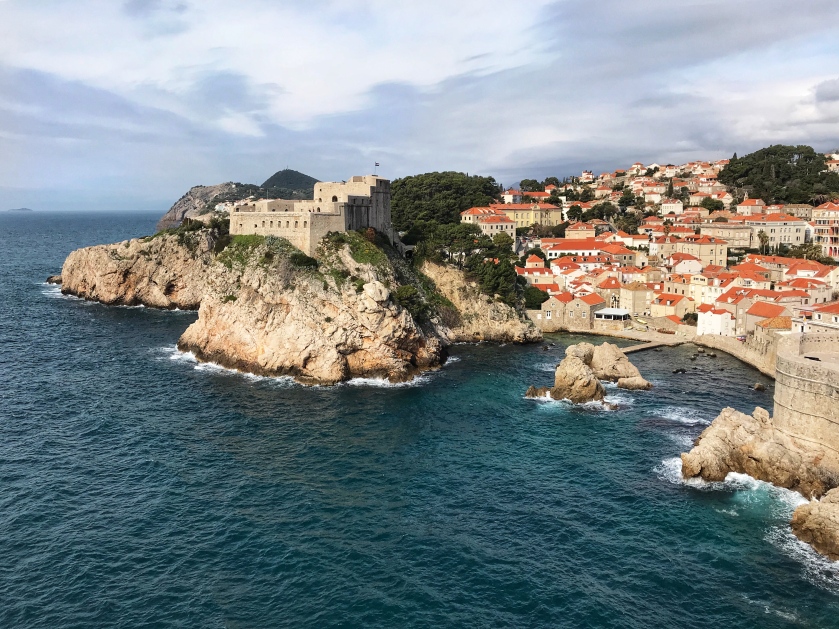 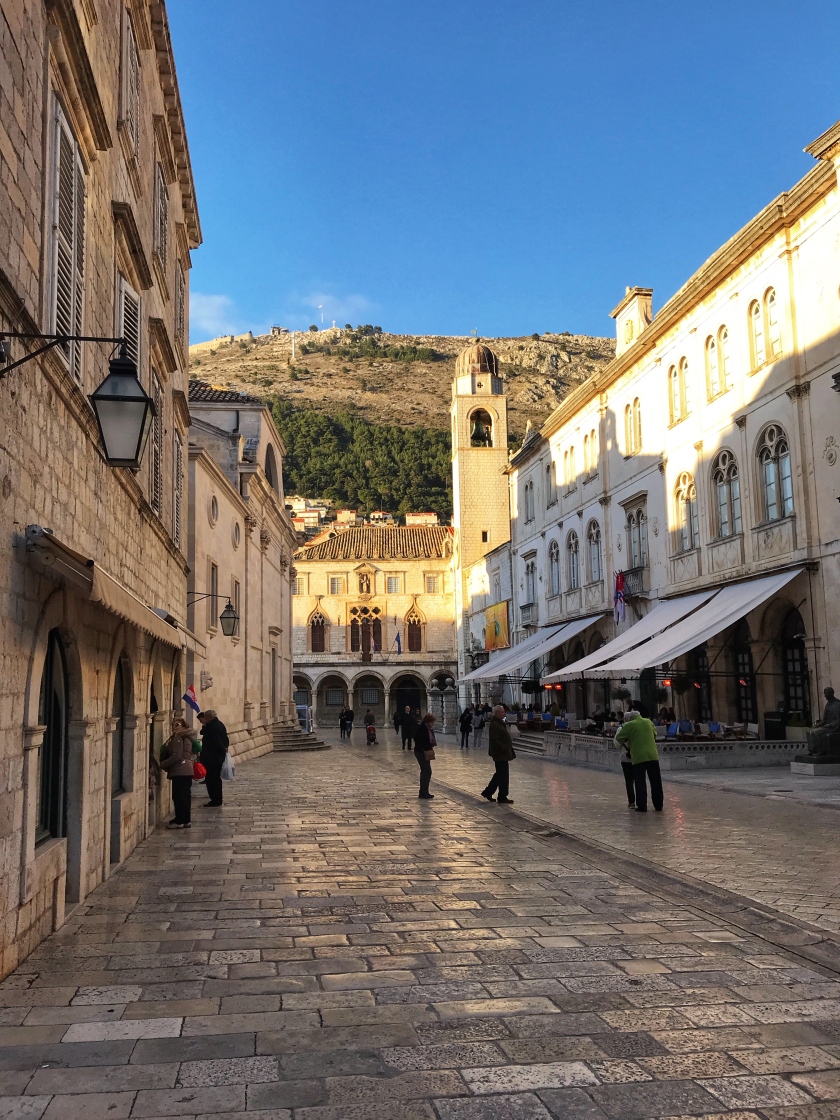 White-stone laden and lantern-lit alleyways are lined with shops and cafes and framed by potted plants and hanging laundry. 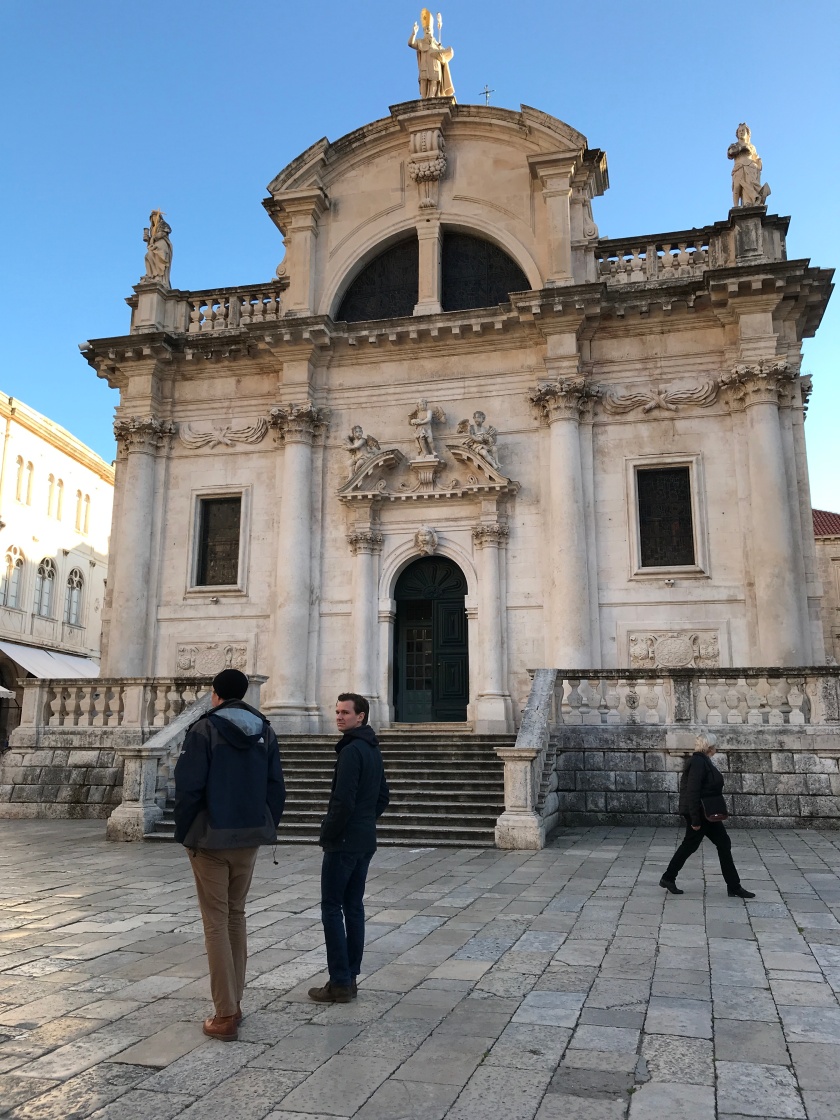 Instead of communing with God in one of the many (many) cathedrals, we communed with nature on an outdoor terrace overhanging the ocean:  sipping hoppy Croatian beer and dry, citrus white wine in plastic, wicker chairs, which had no business being as comfortable as my back and bum perceived them to be. 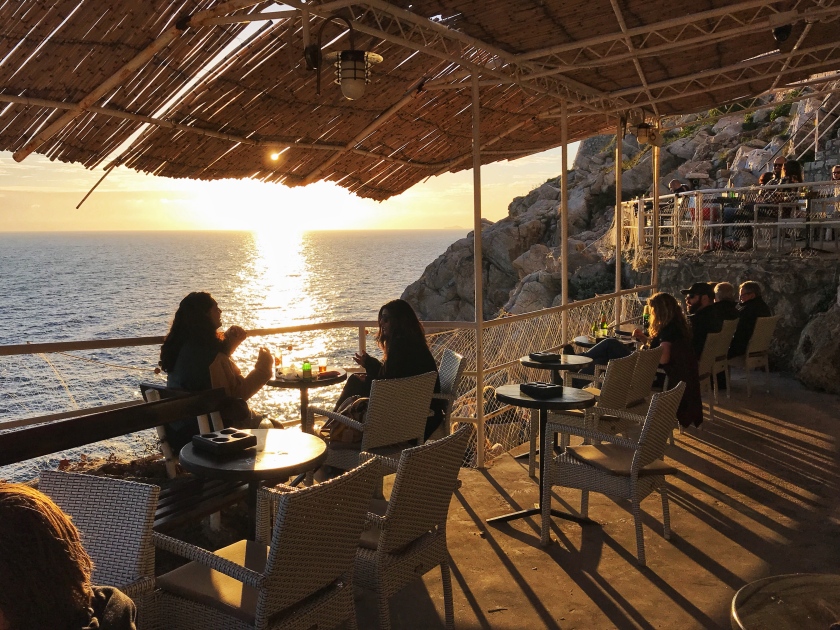 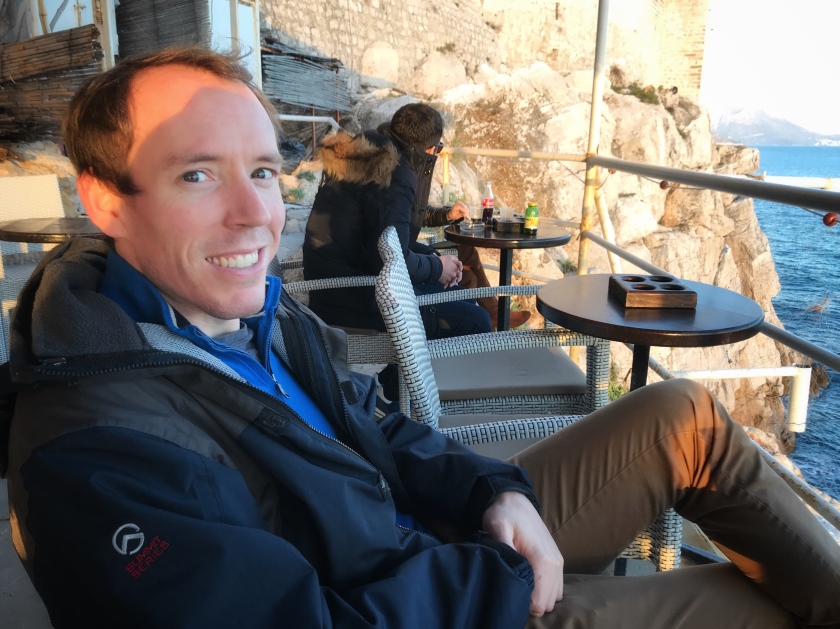 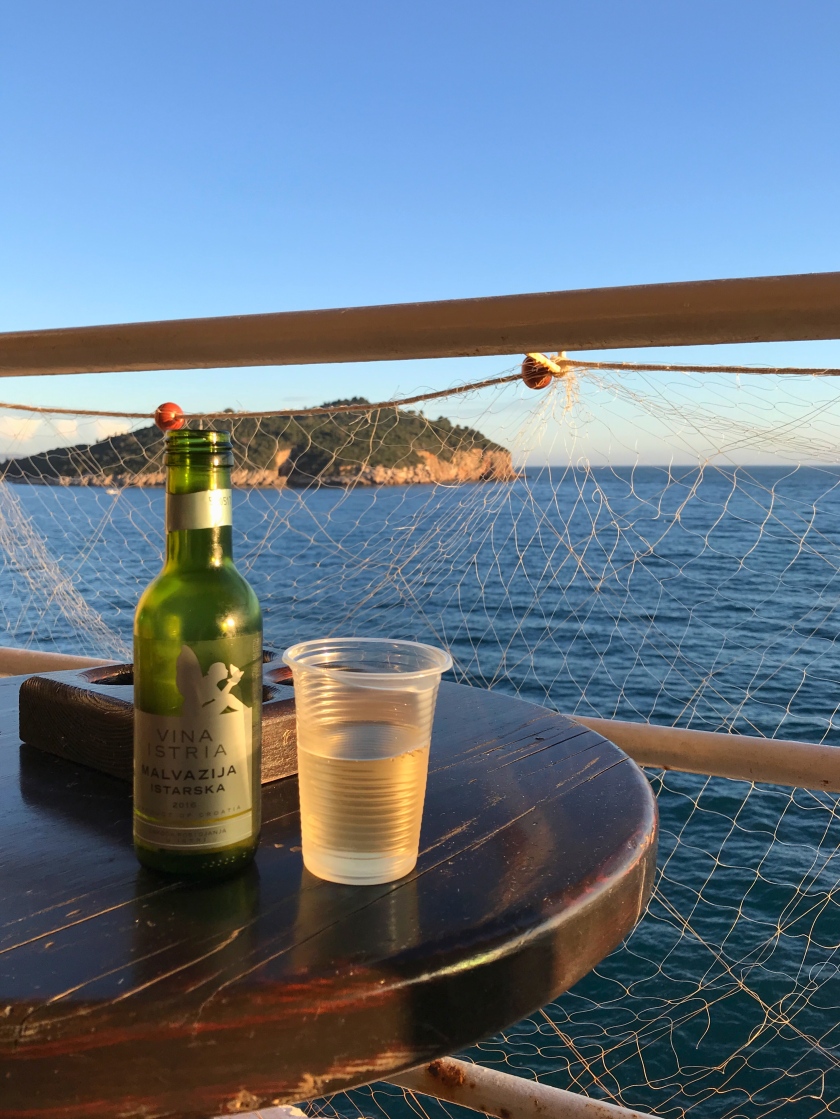 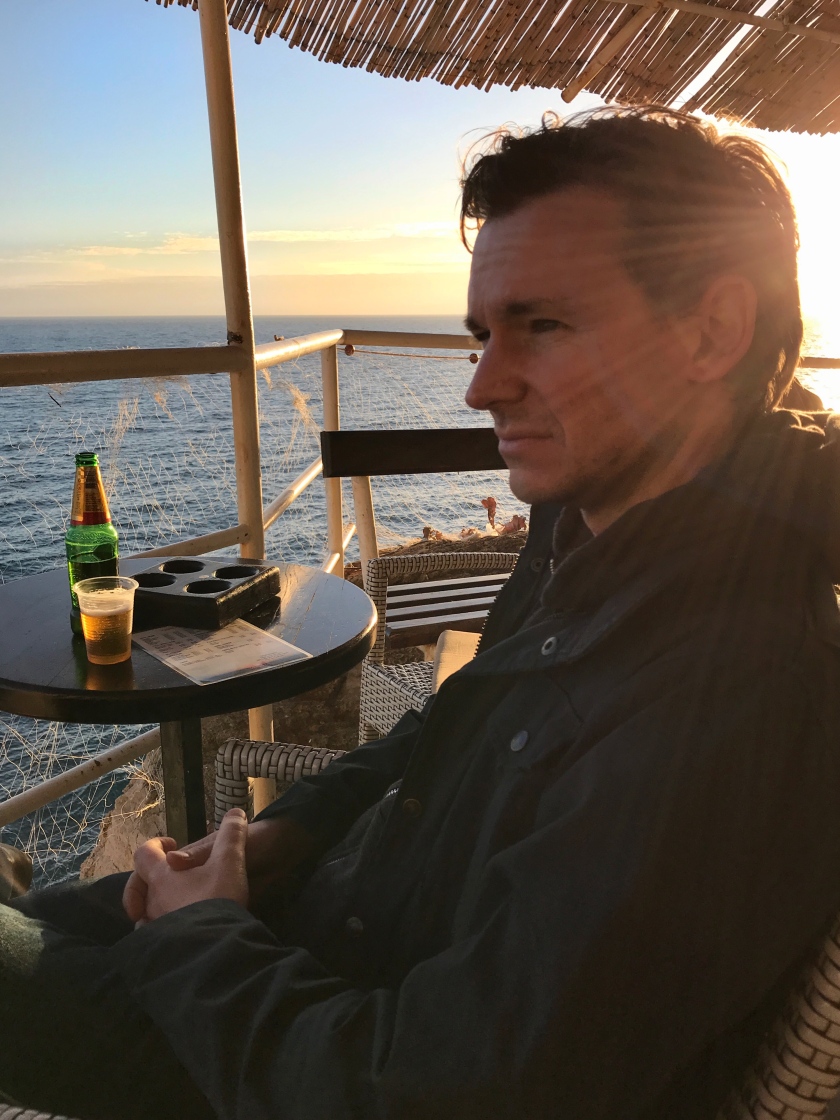 We filled our lungs with crisp, salt-tinged ocean air and watched a burnt orange sun sink down a purple-hued sky and slip beneath distant white-capped waves. 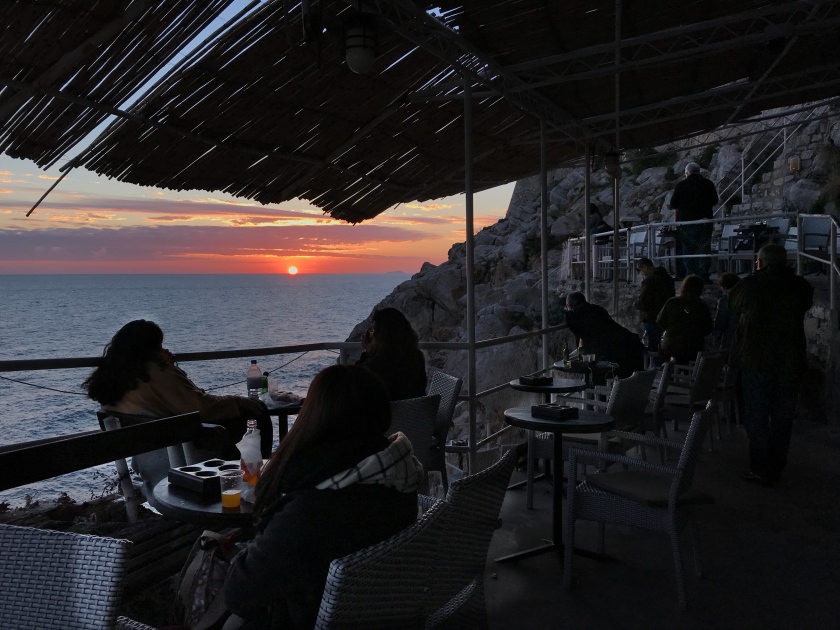 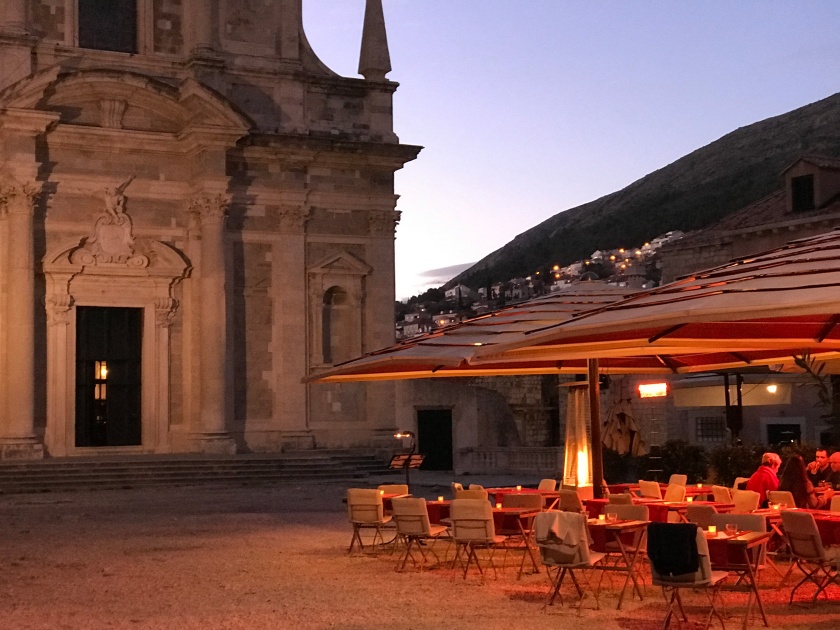 At some point during the day, I was lulled into that kind of mellow, contemplative state that pairs sublimely with a slow saunter through new streets. 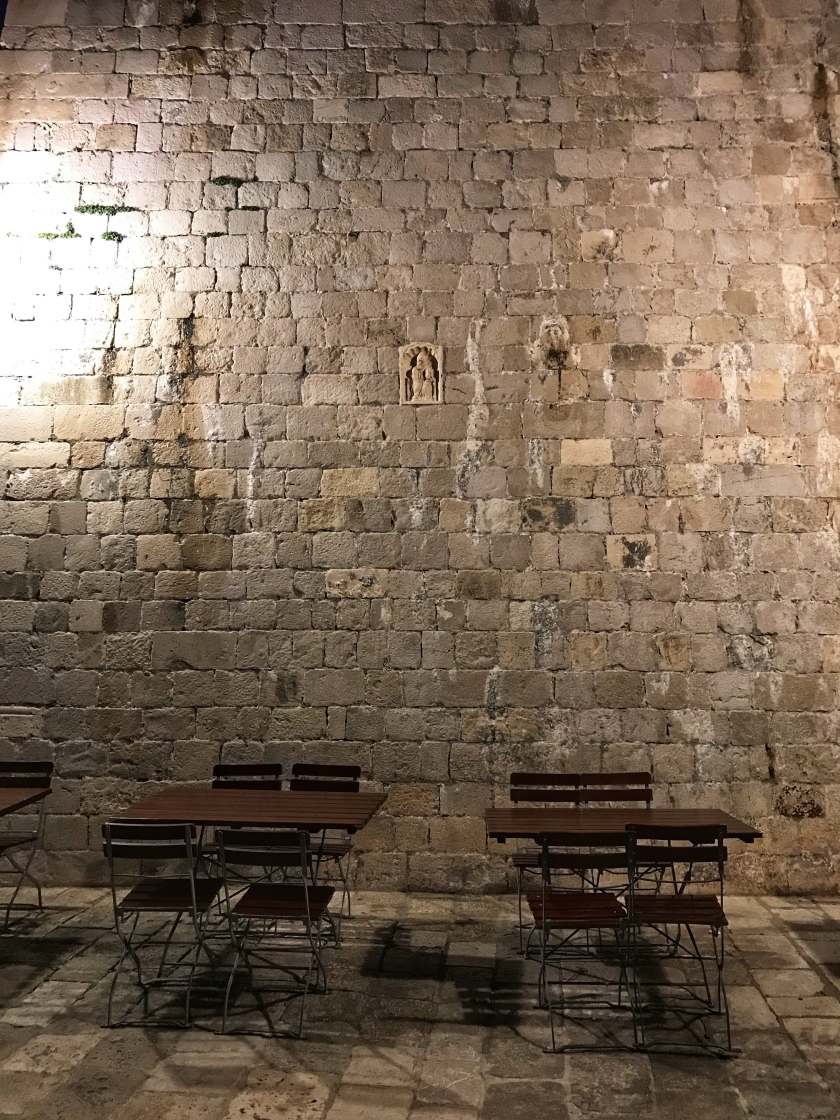 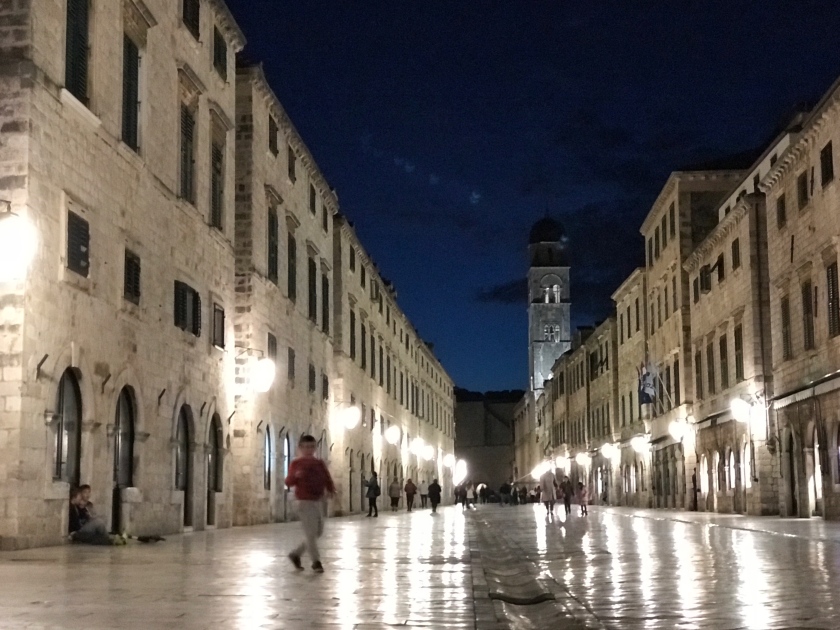 As the sun set, I reflected on my perfect day in Dubrovnik, done without pulling one page from a tourist playbook.  I was more relaxed than I’d been in months, yet a low hum of excitement, running just below the surface of my skin, reminded me how crazy fortunate I was to be there.  Even if it was just for one (gloriously unplanned, un-spreadsheeted) day.